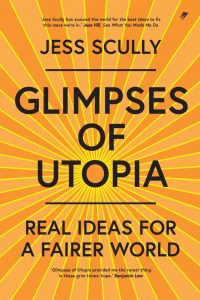 My reflections rather than a book review.

Jess Scully discusses the hope-giving developments she has found around the world that suggest we can build a well society on a well planet if we apply what we know.

There is a lot in there. Most is not new but she has brought it together powerfully.

So CAPaD wants to build a community of belief in democracy. Real people participatory democracy.

Some more specifics about participatory politics:

Of course, there is a website and even better read her book.